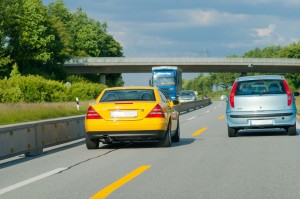 We Americans are a proud bunch. We don't typically enjoy being outdone by Europeans but let us concede that the German style of driving is far more evolved than ours. The reasoning behind that isn't complicated. It's actually quite simple. Germans use etiquette on the road whereas Americans haven't established much useful etiquette. It's not just about being polite, though. German driving etiquette makes a lot of practical sense.

In many cases, as we stated above, Americans don't signal at all in situations where they should. On the German Autobahn, drivers use their hazard lights ("blinker lights") when they are approaching slower traffic which cannot be passed. In order to do this, one needs to keep an eye down the road and start signaling several seconds, at least, before braking. This makes the experience safer and more pleasant.

If you've ever spent time chatting with a German expat or student in the States you've probably witnessed a great deal of frustration regarding this. Further, after you've learned of this concept, as an American, you'll start to get frustrated while driving, too. Let us compare our systems.

Choose a lane, preferably away from the exit lanes, and just drive. When you start to approach a car ahead of you, just push forward until it moves aside.

Choose a lane based on your driving speed. The leftmost lane is exclusively for drivers who want to pass others. Keep moving right until you're out of the way of vehicles that are going faster. Drivers may not pass on the right.

It should be obvious why the German model is superior. It provides a way to avoid the annoying and dangerous act of tailgating; it allows drivers to use cruise control without adjusting it for longer periods of time, which helps save gas; and it prevents tense situations that might bring on "road rage."

The goal of defensive driving is to minimize dangerous situations and keep the flow of traffic moving smoothly. Be like water; find the path of least resistance and avoid obstructing the path of another driver, whenever possible. Lazily putting your turn signal on and drifting into the next lane won't cut it in Germany. You'll be required to use your blinker and check the lane multiple times before moving over. it's wise to take a break when you're tired, because tired drivers don't drive well.

Perhaps the high speeds of the Autobahn led the Germans to develop a stringent set of standards for driving. In the US, these rules may not be as vital but they would surely be beneficial. The question is "how do we get the word out?"

When it's time to get quotes for your next vehicle, get them online. Search local inventory and get free, competitive quotes right here.